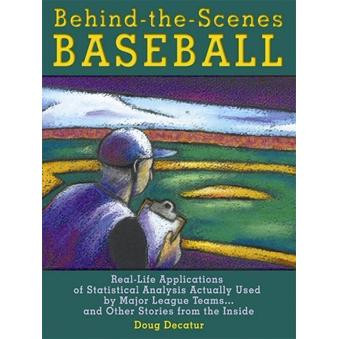 For the baseball fan wondering why, when and how analytical managers and GMs make key decisions in a game and over a season, this insider's book explains the practical uses of statistics in a baseball. Written in three parts, Behind-the-Scenes Baseball begins with stories from author Doug Decatur's long career as a statistical consultant. He details how teams have successfully used statistical analyses when building a team, making key decisions in a game, and preparing for the postseason. He also details the ignominious failures of teams that have ignored what the numbers have told them.

Part two is the GM IQ Test — "what every major league manager and GM should know...but doesn't." Match your wits with some of the smartest baseball gurus out there. There's one manager who will be tough to beat — Houston Astros' manager Phil Garner only missed one question! Questions are multiple choice, true/false, and essay format.

The third part is a concise look at the Houston Astros 2004 run for the pennant, Decatur's relationship with Manager Phil Garner, and the Astros' amazing 36-10 run and their first-ever postseason series win. It even includes a brief epilogue on the Astros' successful 2005 season.

While many baseball fans may have ambiguous feelings about the role statistical analysis plays in the game, this book shows how statistics and "sabermetrics" don't detract from the passion of the game, but rather contribute to an understanding of and love for baseball.

DOUG DECATUR has worked as a statistical consultant for the Cincinnati Reds, Milwaukee Brewers, Chicago Cubs, Atlanta Braves, Houston Astros (Manager Phil Garner) and player agent Myles Shoda. He has an MBA from Xavier University. Doug is a grand-nephew of Art Decatur, pitcher, with the Brooklyn Dodgers and Philadelphia Phillies.