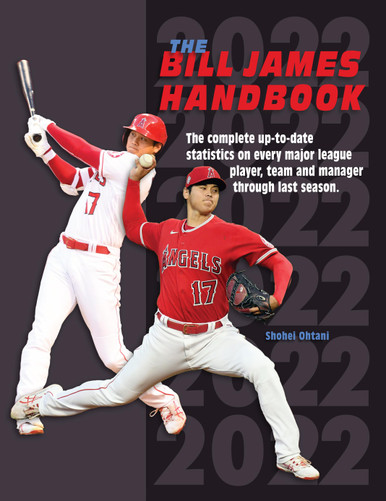 In 2020, the season was shortened to only sixty games, with some temporary rule changes such as the universal DH. Some said the stats shouldn’t even count, but not us. A season is a season, and at the end of every major-league season for the past 33 years there has been an annual Bill James Handbook. If you missed last year’s edition with Fernando Tatis Jr. on the front cover, it is still available. In 2021, of course, there was a full 162-game season, but there were also a lot of changes—some carried over from 2020, some new—that affected and effected baseball statistics in many ways: runners placed on second base to start each half-inning after the 9th, double-headers only 7 innings long in regulation for each game (which led to several controversial no-hit bids), pitchers having to pitch to at least three hitters (unless they didn’t), and so forth. It’s all here in the first-to-market, most comprehensive, and best analysis of the annual and lifetime major league performance stats of every player who appeared in at least one game last season—plus our usual key analyses of team performance, manager records, and ballpark factors; Bill James’ Hall-of-Fame Monitor, Career Targets, and Win Shares; and a whole lot of other things that continue to make baseball a field of dreams.