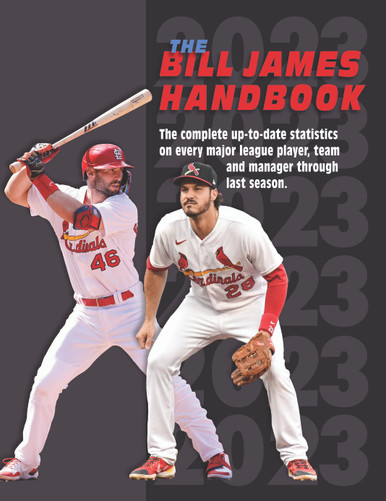 Pitch Clock? Shift/No-Shift?  Bigger Bases? Balanced Schedules? What's next, Robotic Umps? These and other curve balls we will/may see soon in professional baseball. To understand their implications, we need to know how every single player in the majors performed last year and over their career and what we can expect from these vets in the future and the rookies projected to join them soon. Here is just some of what the 34th annual edition of The Bill James Handbook has to offer going into next season:

- Timely! Hits Lost/Gained to the Shift

- First! Hitter and Pitcher Projections for next season

"Hall of Famer Rogers Hornsby, who famously refused to watch movies because he wanted to protect his eyesight, also offered an opinion on what to do when baseball season ended. "I'll look out the window and wait for spring," he said. Unfortunately, for him, Hornsby did not live in the computer age-nor have access to the biggest, baddest baseball reference book of all time. That'd be The Bill James Handbook, featuring 600+ pages of all the baseball information even the most ardent fan would want." --former AP sportswriter Dan Schlossberg.

"Baseball lends itself to statistics better than any other sport, and Bill James takes that opening and runs with it--dissecting the obvious, analyzing the not so obvious, and giving a real perspective to watching baseball. Amen." Randal Shavis, Amazon reviewer

"How did the former night watchman at a pork and beans factory finish in front of Willie Mays and Lou Gehrig here? James used that time in the mid-1970s to work on baseball research. This research later became the basis for a series of successful books and a cornerstone for sabermetrics. ...James did as much as anyone to bring sabermetrics into the mainstream, even coining the phrase in 1982. His handiwork has also done much to reshape the game, helping the Boston Red Sox and Chicago Cubs end those long World Series dry spells, for one.  ---Graham Womack, The Sporting News, ""The 40 most important people in baseball history, ranked"

a description for this product here...