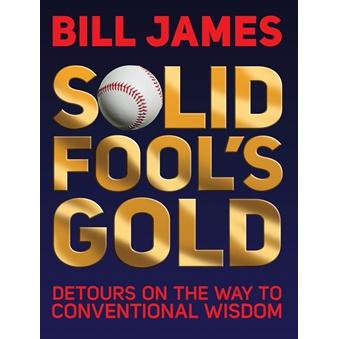 Since he first began publishing his Baseball Abstracts in the 1980s, Bill James has constantly challenged conventional wisdom by asking simple questions like, "Is that really true?" or "What if we looked at the question this way?" He has sparked a virtual revolution in the way the game of baseball is understood and played, from how players are evaluated or positioned to whether or not they should attempt to bunt or steal a base. In Solid Fool's Gold James continues his lifelong work with new analyses of:
But it is not just baseball that draws James inquisitive eye. He discusses the growing expectation for tips and decreasing effectiveness of advertising; his new method for measuring rainfall; the counterproductive use of physical stop lights and red-light cameras; and the statistical inefficiencies of the federal Transportion Security Administration.
James wonders how Buck O'Neil would have related to his ancestor's cousin (Supreme Court Justice James Clark McReynolds), proposes whimsical rules for Olympic NASCAR Racing, and poeticizes about Ricky Weeks and WikiLeaks. He compares the chances of a particular-size town producing a Justin Verlander or a William Shakespeare, imagines Roger Maris apologizing in heaven for having beaten Babe Ruth's single-season home run record, and explains how to "battle expertise with the power of ignorance." As a bonus, he includes one of his seminal articles from The Bill James Baseball Abstract 1983 titled "The Law of Competitive Advantage" and looks at how it has held up over the intervening years.
Bill James
Named one of the most influential people in the world by Time Magazine, Bill James changed the way we view baseball forever using, what he termed, sabermetrics which scientifically analyzes and studies baseball through statistical data.