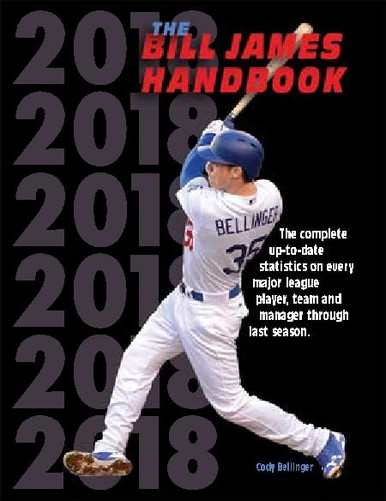 The ONLY place to buy the spiral! Be the first to receive the spiral edition by pre-ordering here!

Bill James and the Baseball Info Solutions team of analysts continue to pack in new content, including a fresh look at the continued rise and effectiveness of The Shift and a new breakdown of home runs and long flyouts. And, as always, the book forecasts fresh hitter and pitcher projections for those looking to get an early jump on the next season.

Sabermetrics has a mixed reputation in the outside world. In mainstream sportswriting, it’s sometimes seen as something real sportswriters don’t need because they see all the games and know all the players. In academia, it’s not always respected as serious research, because it often doesn’t fit into any specific established discipline (although economists are starting to get involved), because it often doesn’t use enough fancy math, and because it’s “only” about baseball. And it used to be that in baseball itself, sabermetrics was not perceived to be anything that would be of use to the insiders of a major-league team…. But the situation in MLB is changing, perhaps due to Moneyball, Michael Lewis’ story of how Billy Beane’s Oakland Athletics used sabermetrics to build a winning team on the cheap. In 2003, the Red Sox hired Bill James. Since then, other teams have hired statistical analysts and begun advertising for similar positions…. If the thrill of scientific discovery isn’t enough, the fact that those discoveries are about baseball — for many, our favorite subject on earth — is icing on the cake.