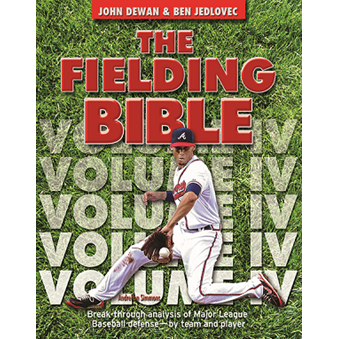 From the Defensive Runs Saved system to the latest shift research, The Fielding Bible has consistently led the way in baseball analytics:

· Who are the best fielders in the major leagues, not just on highlight-worthy plays but day-in, day-out, over the course of the season?

· How reliable are defensive metrics from year to year?

· Which players have deserved their Gold Gloves and which ones maybe not-so-much?

THE FIELDING BIBLE VOLUME IV contains the latest defensive research, analytics, and data from Baseball Info Solutions. Much of that research had previously been reserved exclusively for MLB teams, and it is all updated with all the defensive stats through the end of the 2014 season. Definitive Evidence on the Impact of Defensive Shifts: Examines the evolution of defensive shifting in baseball with analysis of various splits, team defensive alignments, and potential drawbacks. Strike Zone Plus/Minus: A comprehensive system to measure the run value of pitch framing, including unique variables such as pitch command to distribute credit not only to catchers but also to pitchers, batters, and umpires. Expected Stolen Base Success: Predicts the success rate of a runner's stolen base attempts against a specific pitcher-catcher battery, even if he has never run against them in the majors. Defensive Scouting Reports: video analysis of the fielding abilities of more than 270 players based on the observations of BIS Video Scouts. The Fielding Jones by Bill James: the first 25 chapters of the latest insight and research from Bill James. Updated: Defensive Runs Saved, Range & Positioning, Good Plays/Misplays, Bunts, Double Plays, Outfielder Arms, and Pitcher and Catcher Defense ratings. Plus: Unique new studies demonstrating the latest fielding data from Baseball Info Solutions.

Ben Jedlovec is the President of Baseball Info Solutions. He is the co-author, with John Dewan, of The Fielding Bible: Volumes III-IV, and he has previously contributed to ESPN Insider and The Hardball Times Baseball Annual.  A Huntsville, AL native, Ben studied Statistics and Sport Management at Rice University in Houston. Prior to joining BIS he worked with the Huntsville Stars, the Houston Astros, and the Rice Owls baseball team.

Thirty years ago, just five years after receiving his Fellowship in the Society of Actuaries, John Dewan left a highly successful career as an insurance actuary to pursue a life-long dream, the development of the most timely and comprehensive computer database in sports.  The fulfillment of that dream was Sports Team Analysis and Tracking Systems, Inc., or STATS, Inc. During John’s time as President and CEO,  STATS grew rapidly and was recognized in Inc. Magazine’s  Inc. 500, a list of America’s 500 Fastest-Growing Private Companies, ranking #144.  In recognition of his leadership role in making real-time sports information available to consumers, John was named to the Crain’s Chicago Business list of key technology players in Chicago and was a three-time finalist for the KPMG Illinois High Tech Awards. The success of the company culminated in its sale to News Digital Media, an affiliate of Rupert Murdoch’s News Corporation and Fox Broadcasting.
John’s present company is Baseball Info Solutions (BIS).  BIS is totally focused on baseball and collects, analyzes, and disseminates the most in-depth data in the industry, with more than two dozen Major League Baseball teams as clients. He is a regular guest on The Score, a sports talk radio station in Chicago, and has been interviewed by scores of publications and media outlets.
John’s latest books, The Fielding Bible: Volumes I-IV, have broken new ground in an area that has been the least analyzed in baseball: defense.  His Plus/Minus System and Defensive Runs Saved developed in the books are a direct application of actuarial and sabermetric techniques and have been widely accepted in the sabermetric world.
John’s slants on analytics in baseball can be seen regularly at www.StatOfTheWeek.com, a free subscription service, and on Bill James Online, a $3-a-month subscription website, where he is a founder and key contributor.
John graduated from Loyola University of Chicago, with a B.S. in Mathematics and Computer Science.