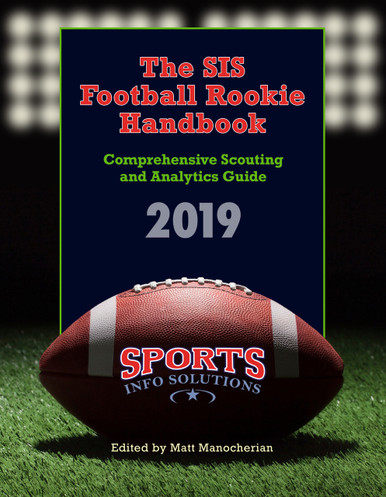 Developing a successful combination of statistical analysis and scouting eyes on the field has been the holy grail of professional sports for many years. One of the biggest factors in football is the large number of rookies who come into the NFL each year from literally hundreds of colleges and universities, where they play a relatively few games over a limited number of years before being drafted for the pros. Yet many of these young players end up in starting and even starring roles in their first year.

Where are avid fans to look for real information on the rookies who may play for their team—or those of their hated rivals—in the upcoming season? The answer to that question is in your hands. Here you will find the very best updated info on over 250 players who may be drafted or signed as free agent rookies in 2019 and which of them might ultimately make the best:

Sports Info Solutions (SIS) has published The Bill James Handbook on Major League Baseball for the last 30 years, using techniques developed by Bill James, John Dewan, and hundreds of other sabermetricians. Now Matt Manocherian, a former NFL scout with the New Orleans Saints and the Cleveland Browns, and the Video Scouts at SIS have spent about 40 hours PER GAME charting and analyzing data on EVERY football game played in the past college season. Their expertise and knowledge, once exclusive to NFL teams, is now for the first time being provided directly to the public.

SIS collects and analyzes college football information like it has never been done before: every play, every formation, every player, every route—in the greatest detail known to humans and to computers. The SIS Football Rookie Handbook 2019 is the perfect combination of scouting and analytics. It will give you an informed look at this year’s rookies like you’ve never had before—and won’t find anywhere else—that will be invaluable from the draft to training camp to preseason games to the regular season to next year’s playoffs.